Walking the Path of Love 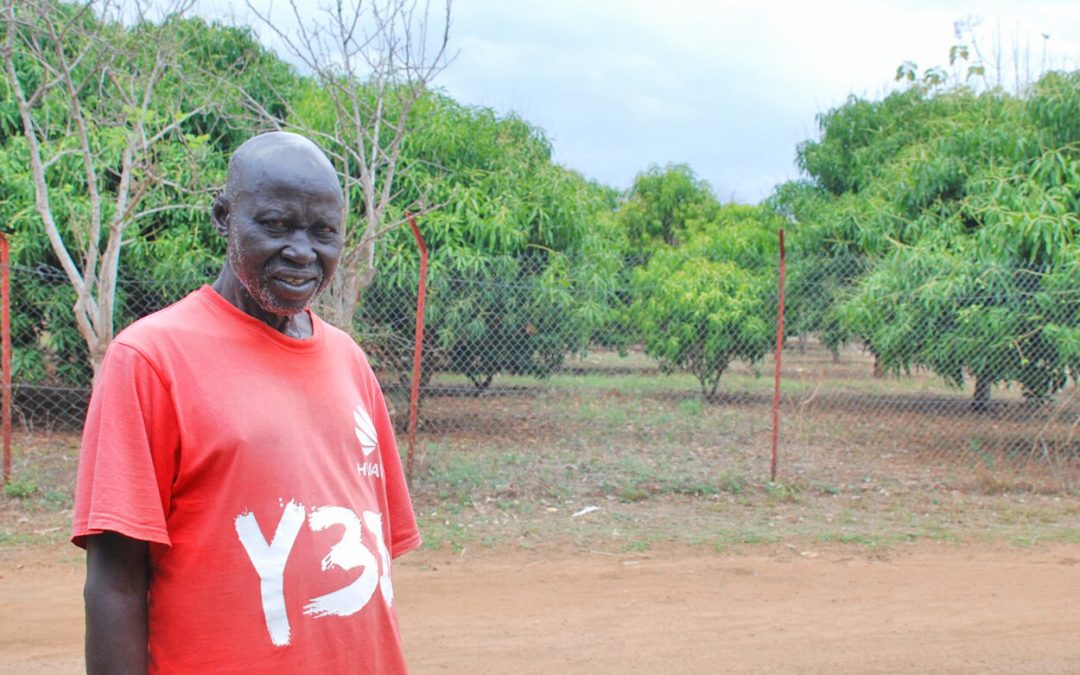 Sharp strikes of lighting cut across the skies as deafening thunder storms roar from the mountains crossing to the plain lands. Atop the hills, dark pregnant clouds have covered the sky from the eastern side. From where I sit, I can see women and children running as they watch the clouds above with their traditional dresses being blown around by the strong winds westwards. On the horizon beautiful golden rays of sunset are struggling to penetrate the think clouds. In the nearby bushes goats are bleating unbothered by the sudden change of weather. As the she-goats enjoy picking the soft buds from the bushes, the he-goats are screeching, unbothered that time is running out. Soon the shepherd will be leading them safely to the stable.

With the changing weather behind him, Mzee* Phillip Oriho lazily stands up to stretch and amidst a deep breath retires again to his seat. Deep wrinkles have formed on his face and I can truly tell it has been a long day for him. He looks down and around like he has lost something and a hoarse voice comes from his mouth, “My worse moment in life is when the Army picked me from my house during a prayer meeting, blindfolded me and kept me for 11 days in a place where I do not know even today.”

*Mzee is a name of respect given to older men in the tribal community.

Phillip sat with me for the better part of the afternoon narrating his struggles growing up in a warzone and the persecution he faced because he was both a Christian and black. He also shared of his early desires to learn and advance agriculture in his nation. As a refugee who had escaped the ethnic, religious, and racial persecution and genocide enacted by his own government in Khartoum—where he was worked as a child laborer—his desire to go to school to become an agriculturist kept on burning.

The pangs of hunger had bitten him so many times during his time as a child laborer and refugee that they began to inform his future path. In the 1960’s, after his arrest and torture, he clearly remembers escaping the massacres happening all around him at home. On a long and determined 1,200 mile trek by camel, hitch hiking, and footing his journey led him from the deserts of Khartoum, Sudan to Asmara, Eritrea and then to Addis Ababa, Ethiopia where he enrolled and completed his primary education and eventually joined Jima Agricultural College in the province of Kafa in Ethiopia. Education of course was not an option for a child laborer in Sudan. After completing the training the Ethiopian government sent him to the harsh region of Gambela (which borders South Sudan) where he worked as an agricultural officer. Phillip was sent to this region because he was “just a refugee” and it was so harsh a landscape that no local Ethiopian wanted to go to work there.

However, Phillip’s high integrity and deep passion has always kept him on the humble path of love and always serving with all he has to offer. As he worked with farmers in and around Gambela, he helped them produce the highest yields ever in that region. This achievement even earned him awards and recognition in the Ethiopian region of Gambela in the early 1970s.

While Phillip’s dream was coming true in Ethiopia, there was a growing movement for independence in South Sudan, as well as, a growing demand for people who could fight. Philip resigned from his agricultural job in Ethiopia and returned to the Sudanese capital Khartoum to help his people achieve independence.

As fate would have it, Phillip found himself in the hostile Sudanese capital and he could not get a job. Long standing tensions and discrimination against indigenous Sudanese left it nearly impossible to find employment. Ever innovative and wanting to engage in peace building, he volunteered to teach bible and literacy classes at a Lutheran church in Khartoum. He also formed a group which helped the church have the biggest poultry farming ever. This enabled him to receive salary and for many years Phillip worked for the church as an evangelist. It is through evangelism that he eventually came back home to South Sudan in 2004—the first time in over forty years that he had been to his home village since he was displaced by war when a boy! He later joined Hope for South Sudan in 2010 during the inception of the orphanage as an agriculturist.

Phillip has worked so hard and established the best orchard in the region where the orphans get fresh fruits. The once dry and bushy shrub-land has been turned into a flourishing farm where fresh fruits hang from the trees. It’s also been Phillip’s passion to lift up the vulnerable through increasing adult literacy.  For years he has spearheaded the movement of adult education for the HFSS local staff and local community!

Since the start of this year Phillip has been training his team at HFSS to carry on with the work. His body is becoming weaker partly because of age. As the day comes to an end, Phillip shared that he is proud that he has contributed in spreading love to the orphans through his gift in agriculture.

It is through your gifts of LUV that we have been able to support Hope for South Sudan and faithful leaders, like Phillip, who have walked the path of love for years and shepherded hundreds of lives through the many storms that have come. As a peacemaker himself, Phillip has inspired and lifted up the next generation to carry on the torch of Christ’s love through his passion to see his nation, his world, and the hearts of vulnerable children transformed.

As Phillip also passes the torch of farm leadership, we are honored to continue supporting Mzee Phillip through our assisted living program at HFSS. During COVID-19, he and the other seniors living in the HFSS compound are yet another important reason HFSS has been in lock-down. In a part of the world with little to no medical care available, the surrounding community now has over 30 confirmed cases of coronavirus.

While a new storm has rolled into South Sudan, your partnership and gifts of LUV are equipping us to lift up and protect the most vulnerable.

Give the Gift of LUV today in honor of Phillip and continue his legacy by investing in more lives in Sudan and South Sudan! Like Phillip, your generosity is transforming the world with LUV.