They made me eat my teeth 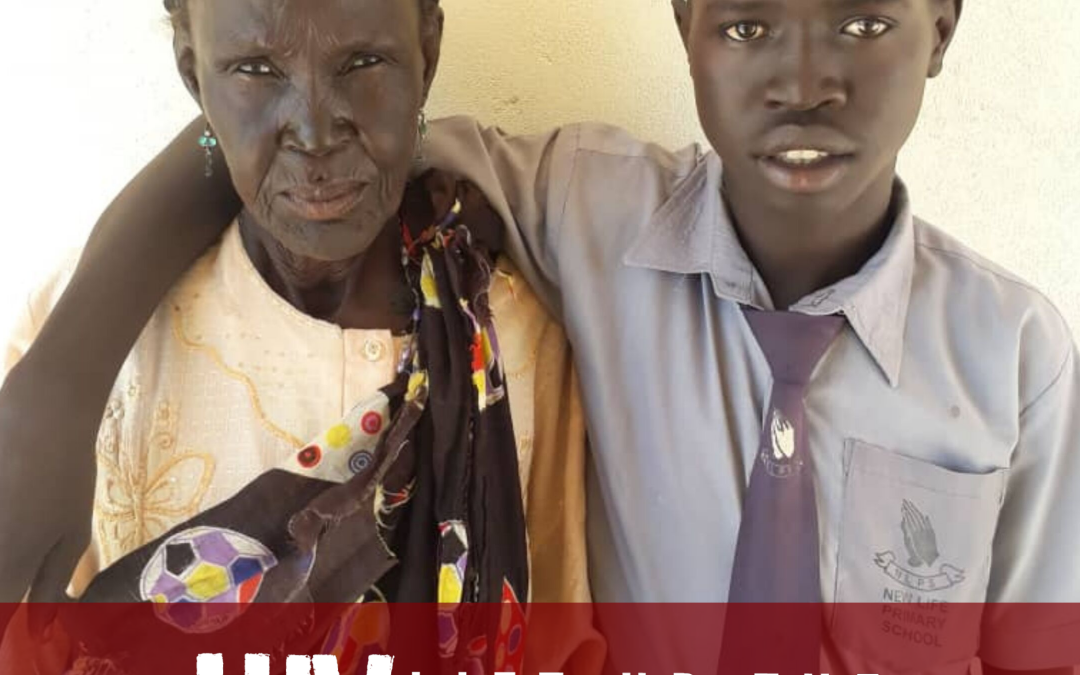 “I am called James Deng from South Sudan. I was brought up by my grandmother who suffered a lot taking care of me. My grandmother who is called Amonica is also a widow and she serves as a cleaner at New Life Ministry. Despite being in desperate, she brought me up healthy and I wish to become somebody important some days to come.”

Pictured above is Amonica Abukdit from South Sudan, in the village of Nyamlel along the border of Darfur. Amonica is 71 years old. She took the photo with her grandson, James Deng, who is a student at LUV’s school and orphan home called New Life Ministry (NLM).

Recently, Amonica and James told their story of loss and grace to NLM child sponsorship coordinator, Isaac Lual. This is what they shared:

Amonica: “I was born the last daughter after five sisters and two boys. My father and mother lived for many years, my father reached 105 years and my mom died at 95. Before they died, there was never any “sudden death” that occurred in my family. Later, after they passed away and I was married, things worked out badly. I gave birth to 12 children, 6 daughters and 6 boys. Unfortunately, all of them died from different causes. At first, 8 of my grown up children died suddenly.

Traditionally, people used to believe in devil spirits and when you did a mistake to such devils they would punish you unless you strongly believe in God and condemn their interests.

To tell the truth, many said that the death of my 8 children was from the demons’ wish and act. I lost 8 children right before the Arabs from the North invaded our village and my other 3 children were shot dead. There was a horrific raid in the area by the Arab militias called the Janjaweed who randomly shot people trying to run away. That was where my three children were killed. Meanwhile I survived with my youngest son who is the father of James Deng.

I left the village with my son when the town became a spot of betrayal and slavery by the Janjaweed. The town is situated along the railway from Khartoum to Bahr El Ghazal (a state in South Sudan) and that railway was used by the central Government of Khartoum to supply its armies who occupied the lands of Southerners and also send slaves from our region back to Khartoum. A terrible behavior started from our fellow people when they saw living there was dangerous. Some out of despair accepted to be slaves and others turned to be betrayers. Those traitors were named as Arath Wathan.  Arath Wathan used to collect information of attacks by the SPLA or if there were important people around, they would go and expose it to the Arabs in order to gain favor and live freely. I was one of victims of betrayal where I survived with a lot of injuries. I was beaten up properly and at one point a Janjaweed soldier hit me with the barrel of the gun, right on my mouth and my teeth fell out. He ordered me to swallow them and I did. The people who did not cooperate with any form of oppression were finished with live bullets.

Brutal killing increased and I had to hide myself with my son in a tukul (grass roof hut) for three months until I escaped to the town to Nyamlel up to today. Later, my child grew up and he joined the army of Dr. John Garang, the SPLA. I didn’t stop him because many wanted to die in a fight for Liberation instead of dying as a slave.

But, my son saw many killings and it haunted him. The war trauma affected him so much that he could not go back to his normal sense and he died later. His wife passed away suddenly too and their child, James Deng, remained with me.

James Deng:  “Today, I have 14 years of age and I am in grade 8 from NLM Primary School. I was the only child to my parents. My father died when I was not born and my mother died also when I did not know myself. I was brought up by my grandmother who suffered a lot taking care of me.  I usually praise God for having me being conceived before my parents passed away. My grandmother is also a widow and she serves as a cleaner at NLM.

Despite being in desperate, she brought me up healthy and I wish to become somebody important some days to come. I pray to God that I should always be ok and lucky. I do blame the elements that brought war to South Sudan and to the world because that’s what victimized my life to hardship and suffering. As my grandmam shared, my father lost his mind and his mental illness deteriorated later to real madness. He could not get any medical help either till he passed away horrifically. Without my knowledge, my mother died too of stress and unknown illness. Immediately after all this, my grandmother took heart to proceed with life as she used to attend prayers at the Church every morning and evening. She had strong heart and was too courageous I tell you! She was the only widow seen to be faithful and God fearing one in the entire Church Community in the area.

Later on, she met with a man of God and good deeds, James Lual Atak (the indigenous director of NLM) who listened with tears to my caring grandmam telling him her problems and immediately James offered her with volunteer work. Food never became an issue since then. James called for me later to join studies.

Amonica: “When I joined the church congregation, I learnt about a man called Job in the Bible. A man who was great one time but then he lost his family and valuable properties. He remained a strong believer until Almighty God felt pity on him and Blessed him with more than he had. I hope one day even after my death, that my grandson James Deng could be somebody important.

Can you imagine how God directed me to come to Nyamlel and meet up with James Lual Atak who revived my life by offering a small job as a cleaner and took care of James Deng in the School?
.
James Deng: “I am happy to be with my NLM family and the great acquaintance I got in this wonderful School. I have many more to say but it brings tears into my eyes as I speak out, so God bless me and bless NLM and Bless my readers and Bless well-wishers around the world.”

The reality is that many of our children have histories of deep loss, betrayal, sudden death, trafficking, and despair like Amonica and James bravely shared. The exploitation of vulnerabilities continues this day in Sudan and South Sudan. But, with your help, so does the lifting up of the most vulnerable and the transformative gift of faith, hope, and love.

Join the movement of LUV in standing with vulnerable children and women at-risk in warzones. Sponsorship is one small but tremendously important way in which you can join this movement and raise up a new generation of peace-makers. For just $6/day you can house, educate, heal and restore lives. Contact me or donate today to stand with James Deng and Amonica and lift up the most vulnerable in our world. Love is needed more than ever. Join us.

For they will know us by our Love,
Audrey Moore
Executive Director