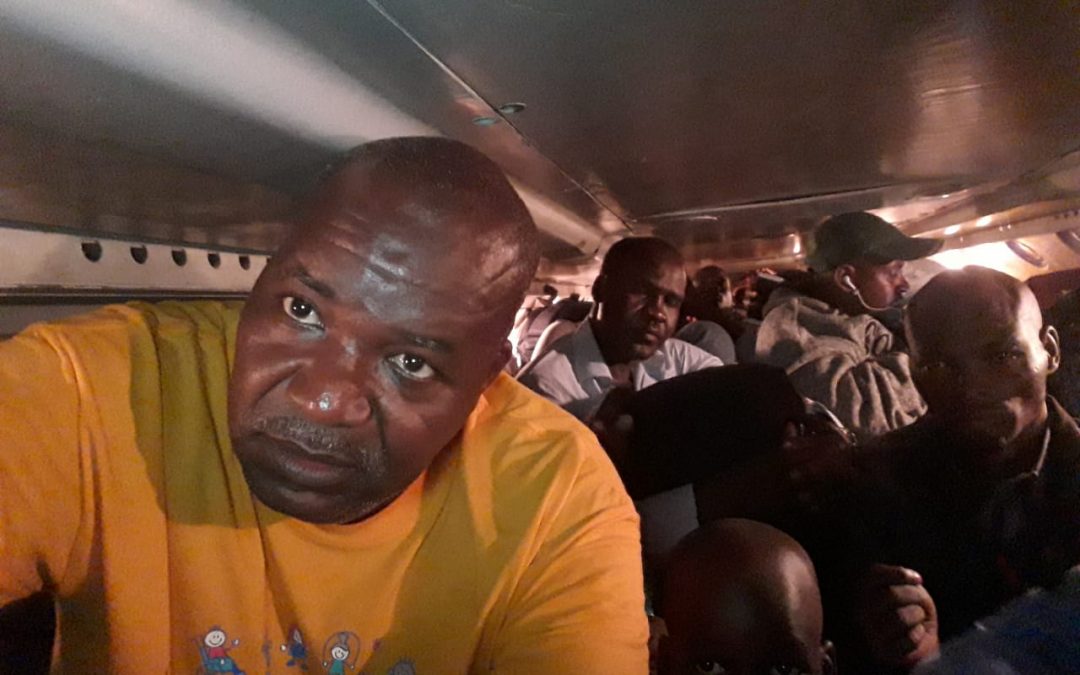 I walked up the 5 foot long staircase and behind me were more than 30 women. I was the last man to get in probably due to my age. My now grey hair has severally made me earn some undeserved respect. I remembered that I had seen a list of over 50 passengers when I purchased my ticket to fly from Juba, the capital of South Sudan, to the northern most part of South Sudan on a cargo plane.

As I was bending to get in through the tiny door of the huge Antonov plane, I saw an aluminum sticker on the door written both in Russian and English, “Made in 1990.’’ Wondering if it had been inspected since that time, I came up to a white man standing on the pathway to the cockpit. He was breathing heavily, with streams of sweat running from his head downwards making him look like he had dipped himself in a swimming pool. I later remember seeing him while we were airborne in control of the huge plane.

I was travelling “as cargo” with Simon Lokwam, Lift up the Vulnerable (LUV)’s Technician, who together with Amanya Francis were accompanying me to Our Father’s Cleft ministry (OFC) to work on building canopies to block the rain on our high school classrooms and dormitories. There is no public road transport to this region and therefore ordinary people struggle to find safe transport. Although I have never traveled in such a fashion, because I was travelling with Amanya a resident of South Sudan with no ID card (a common occurrence in rural areas)—we had little to no options before us. We waited for 4 days in Juba simply in order to get spots on the only available cargo plane flying to our destination. In the absence of that, we would have been forced to charter a private plane that would have racked up several thousands of dollars.

As I boarded the old, overloaded Antonov a young man yelled in Arabic, directing me using the light from his dim spotlight for where to lie down. It was completely dark inside the plane and climbing over the stack of non-human and human cargo was the most difficult thing for a 95kgs/209lbs man like me. The same fellow who was very friendly when I was buying the tickets had completely changed. He wore a stern face now which clearly read that he had very little patience. It was either to obey the orders or he would quickly move up to arrange his human cargo like piles of logs. More over the plane engines were off and oxygen was running out fast.

I gasped for fresh air as many times as I could once I had weaved my way atop the highly stacked cargo.  I felt waves of fear run through my stomach in quick succession. The waves felt and sounded more than the moments of an earthquake. I pinched myself to remind me that I was not in a weird dream. I was experiencing real life in South Sudan—where lack of options and greed for money makes it “acceptable” that humans are treated inhumanely and with disregard for safety.

After a while, I heard the engine roaring as the wings cut into the cloudy African sky while shaking the whole aircraft. Amidst the fear I remembered I had a mission to accomplish. In addition to overseeing the work of Simon and Amanya, I was going to Our Fathers Cleft ministry to take the staff through a 3 day management and supervisory skills development course.

Drops of salty sweat dropped down my already frightened face. I looked behind me and saw a young man, about 25 years old struggling to open his zippers from his supine position. There were only a few inches between him and the roof, thus making it difficult for him to unzip as his hands could not pass freely. Before I could ask him if he needed help from my already helpless position, I saw his face turn with pain and agony and the next thing I saw was his jeans turning wet. It was then I realized he had finished his business.

Besides me was a young tall lady with a young baby boy of probably one and half years. The baby was crying and the mother was getting annoyed. She shouted to the baby many times in her mother tongue. “Can I help you?” I asked her. She stared at me with murderous eyes and said a few words in Arabic. I quickly smiled back at her and asked her again, “Can I help you?” Luckily, one passenger who was next to us interjected quickly and told the lady in Arabic that I was asking if I could help her hold the baby. Her face brightened with a big smile which exposed her beautiful milk white teeth as she passed the baby to me. The first attempt to pass the baby over to me failed as there was barely enough room between me and the roof of the plane. The second attempt also failed and so everyone around us had to take a deep breath so as to create more room for the baby to pass through. Finally I got hold of the boy and upon looking at my sweaty face he cried even more. I tried to look at the mother but I had no space to turn to see her facial reaction. She was so squeezed, from where she laid, that I though her bones would crack.

I attempted to keep the baby calm and started singing lullabies to my new friend. I felt a connection grow between us after two or three songs. The small baby slowly stopped crying as he tucked himself into my chest. I could feel his tiny heart beat as he began to snore. As the snoring became louder I laid my head against the cold aluminum body of the plane.

It was then that I felt my heart calm down as if a lullaby was being sung over me as well and suddenly all the pain of this uncomfortable and dehumanizing experience was gone. I was overcome by deep and growing gratitude and I heard a small voice say to me,

“Eugenio think of how privileged you are…

Though you come from a third world country, such things do not happen there. Think of the suffering that the people in South Sudan and Sudan go through. I wanted you to have this experience so that you can share with other people all around the globe.’’

I am not sure whether I was asleep or awake but that was one of the most sacred moments in my life—to connect with the Comforter in a vulnerable moment and to meet the ever-same Suffering Christ in the suffering of others.

The next thing I heard was a tired voice shakenly shouting “Eugenio we are landing. Wake up.’’ It was Simon. Within a few minutes I heard the roaring of the engine as the wheels hit the ground and then everyone let out a huge sigh of relief and began to shout “God is gracious”, “Hallelujah”. I looked at my watch. It was a 1 hour 40 minutes flight.

It took several minutes to unlock ourselves from the positions we were in, before crawling down to the door. I hurriedly walked down the short stair case to the bare dusty runway and thanked God for bringing us to safety. The temperature must have been close to 36°C/97°F. A few feet away I saw a man with a big smile and hands wide open hurriedly coming towards me. He stretched his right hand towards the left side of my now wet chest, with his palm cautiously landing as if to feel my heartbeat before we could hug. Ezekiel Ayub, Our Father’s Cleft Indigenous Director, held me tightly and said, “Welcome my Brother.’’

We had made our first leg of the journey. The second half would begin soon as night fall came and it would be safer for us to travel by our Land Cruiser for the remaining 8-10 hours road-less drive before us.

Serving the most vulnerable in our world is no small thing; the risks are high, the travels are long and complicated, and the need is great. And yet, every time I simply praise God for the chance to Go with love and serve my brothers and sisters in warzones.  Every time I am thankful for the privilege to share in the suffering with my family in Sudan, and also in the comfort of God’s abundant Love.

We need you in this journey. Join us!