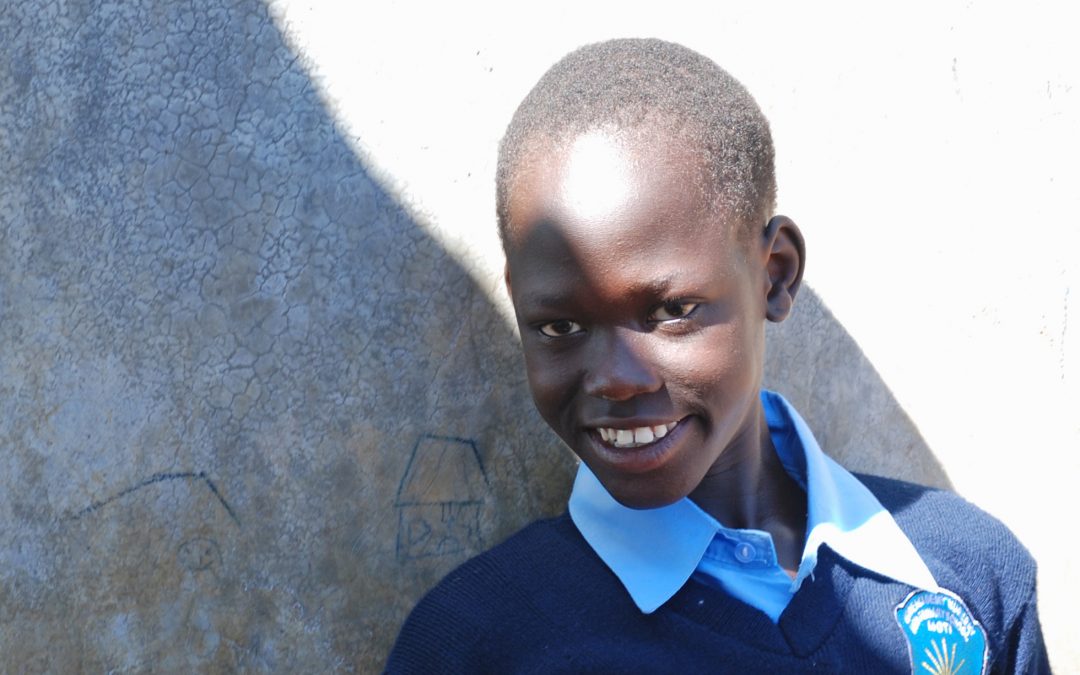 In the blink of an eye, Umjuma’s brother was gone and the final link to her immediate family had been taken from her.

Days earlier, Umjuma’s mother had been murdered along the roadside leading to the market in Juba (South Sudan’s capital). Her mother, brother and she had been living in a dangerous slum. Thankfully, her uncle was nearby and the family often went to him if they needed any extra help.

When her mother’s body was found and word got around, Umjuma’s uncle quickly came to the slums, found Umjuma, and took the then six year old to his house and hoped to come later and get her brother “Sebit” who was out gathering fruit.

While Sebit was picking fruit in the bush he was abducted. Later it was discovered that the boy was sold for $150 to a family who wasn’t able to conceive and had been waiting for an adoption.

The same family promptly left town without a trace—in the direction of Ethiopia.

According to Polaris, “the most pervasive myth about human trafficking is that it often involves kidnapping or physically forcing someone into a situation. In reality, most traffickers use psychological means such as, tricking, defrauding, manipulating or threatening victims into providing commercial sex or exploitative labor.”

Although this is true, in lawless lands and conflict zones—like Sudan and South Sudan—kidnappings have been a long-standing norm and are on the rise.

Traffickers thrive on the chaos of raided villages—kidnapping children to serve as child soldiers, for labor trafficking, sex trafficking, or (like in Sebit’s case) for adoptions.

In addition, an endless number of unaccompanied minors have nowhere to go for help, and are thus more easily exploited, or have simply gone “missing.”

It’s estimated that “civil unrest, violence, conflict and insecurity has forced over 1.2 million people out of South Sudan. About 82 per cent of them are women and children. Among them, are unaccompanied and separated children.” [UNICEF] For those who have remained, estimates are as high as 2 million orphans still living in Sudan and South Sudan combined.

“Child kidnappings between clans have increased as people become more desperate amid widespread hunger and a devastated economy… many in the Murle tribe base ‘their livelihood’ on selling children….Children who aren’t sold are kept by families without kids while girls are groomed for marriage…’People have no resources and no salaries, they aren’t working and so they get children and trade them for commodities.'” [Chicago Tribune]

In this short video clip, Hope For South Sudan’s Executive Director, Peter Lomago, shares more about Umjuma and Sebit (not their real names) and how trafficking happens in his state:

This video is from a longer conversation with expert practitioners from Lift Up the Vulnerable’s indigenously-directed anti-trafficking network—James Lual Atak, Ezekiel Ayub, and Peter Lomago—on how human trafficking manifests itself in Sudan and South Sudan. You can watch that conversation here: https://youtu.be/GersWv1XQFM

Because of our supporters, Umjuma—and hundreds of vulnerable children—have access to protection, education, emotional and Christ-centered spiritual support… a chance to simply be a child again and hope for their futures. Our donors are making a difference.

Umjuma’s uncle heard about the anti-trafficking network that LUV leads and brought Umjuma to Hope For South Sudan (our indigenous partners closest to Juba). Our team worked hard to locate Umjuma’s brother, but Sebit has never been heard from again.

Umjuma quickly felt loved and cared for by her new support system—and is regularly visited by her uncle. After years of faithful care, Umjuma is now in her second year of high school!

Your generosity, prayers, and sharing prevents the trafficking of vulnerable children and will offer hope, healing and opportunity for hundreds more.