The Burden of Carrying A Different Skin 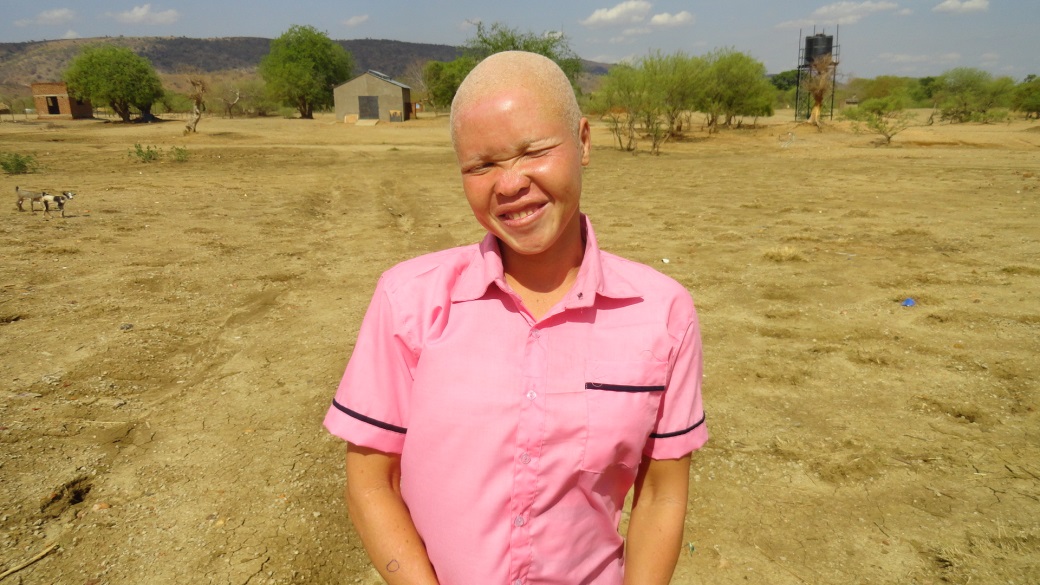 “The burden of carrying this different skin has caused me untold suffering and misery. I don’t know even why I am different from the others.”

These were the words from Daula who was recently rescued at Our Father’s Cleft primary school in the Nuba Mountains of Sudan.

From a far distance one is able to quickly identify Daula from the other children. Her snow-white skin attracts attention from wherever she is. Her “sufferings” are made more complicated by the lack of education on her condition among the villagers. Many children living with albinism are isolated, abused and discriminated against. Some see her as a bad omen which needs to be eliminated from the society, others see her as a remnant of their fairer-skinned Arab oppressors, and yet others see her as a commodity to trade and make money off of.

The UN report, submitted as part of the Human Rights Council resolution, states that albinos are often regarded as “ghosts and not human beings, who can be wiped off the global map.” They are often persecuted as devils or people who are a bad omen or suffer from a curse. In some communities it is “believed that contact with them will bring bad luck, sickness or death.”

In east and central Africa, albinos have been kidnapped and sold across the borders to witch doctors who remove their body parts for use in witchcraft. Whereas many countries are developing policies towards protection of albinos, South Sudan and Sudan have no such laws. This is made more complicated by the fact that Nuba Mountains is a warzone. It is therefore no surprise that the albinos in these regions have no system or mechanism to protect neither their lives nor their delicate skin.

Daula was born in Karindi—one of the unreached villages in the Nuba Mountains. There are no schools and hospitals and the mortality rate is very high. Daula is 18 years old and has 2 brothers. Her parents passed on when she was about 3 years due to “unknown diseases”.

When I sat with her during my recent visit to OFC, tears flowed down her beautiful cheeks as she shared her story—so much so that I had to stop several times to console her. She narrated to me the deep heartache of betrayal she experienced from a very young age growing up as an orphan. Her relatives chased her away so as not to bring misfortune to others. As a child, she moved to a neighboring village and while there, as young as she was, she did manual jobs and earned enough money to enroll at the local primary school. She would wake early in the morning to fetch water and on weekends she would work on people’s farms just so she could continue her education.

However, as time went on, life became unbearable because of the violence against her from the community where she was living. One afternoon, as she was walking home from school, she met with a man who drew a knife on her and proceeded to stab her several times. It was just by chance that some people heard her screams and rescued her before he could kill her. The stab markings are still fresh on her skin.

After the stabbing incident, she moved to another village and was housed by a “good Samaritan” who was kind enough to house and feed her, but who still held on to old beliefs and superstitions about her condition and treated her as an “other”/outsider. Her daily routine was to wake up early in the morning to work on the host’s farm. During evening meals, however, she was not allowed to share the table with the hosts children and would be served to eat her food alone. Furthermore when it rained, she was not allowed to stay inside the house as they believed that she would bring a bad omen to the family and so she had to endure staying outside in the rain. In Sudan, almost half of the year is rainy season.

If the pain of abandonment and betrayal were not enough, her problems are compounded by the fact that she has never had the opportunity to apply any skin protection cream to protect her delicate skin…. for, where does a child with no advocates, in a warzone, and with scant resources go for help for sun protection? When it is hot, her whole body gets blisters which easily turn into sores. The sun is also very bright in Nuba and without sun glasses her vision has become very poor.

It was while staying with the last host that Daula learned of the love made possible through OFC for the most vulnerable in her community. With much tenacity and a heart ever holding on to hope, she decided to try to her fate one more time. Because of your partnership that makes these opportunities possible, Daula was admitted to live at the orphanage and was immediately enrolled in primary school this year. Daula is now in grade 3 and her dream is to become a pilot so that she can rescue other vulnerable children. Her life has changed tremendously since she was admitted at OFC. She participates in all activities with other children and she thanks God for giving her a chance to live with other children and staff that never discriminate against her because of the color of her skin.

Lift Up the Vulnerable ends human trafficking—one life at a time. Without your support children like Daula simply have no place to go for help.

In Arabic, Daula means “power.” As I sat with her and heard her story of tremendous suffering, Daula displayed the deep knowing of her dignity and worth—even when the world could not or would not name it for her. Daula persisted and with a world-changing inner strength she fought for herself and held on to hope that life could be different. At age 18 and grade 3, Daula hungers for more out of life and with your help she will continue to know the redeeming power of Love that surrounds and stands with her.

Make a donation today in her Daula’s honor to help LUV rescue even more vulnerable children and provide hope, healing, transformation and love. Together, we are raising up the next generation of peacemakers in warzones.